Last Wednesday night, Hubby and I and our friend Jessie went to The Sinclair in Harvard Square for a special event entitled: THE SINCLAIR'S CULINARY ROAD TRIP.

Side note -- The Sinclair has some of the best acoustics we have ever heard at a music venue (if you didn’t know, it’s both a music venue and a restaurant, with separate entrances)….for example, we went to a folk metal concert there last year, and even for bands that I had never heard their music before that night, I was able to clearly discern lyrics.  That’s pretty amazing.

Returning from that small tangent, the culinary road trip was billed as “a fun sampling of regional United States cuisines brought to you by Executive Chef Keenan Langlois.  Attendees will feast on tasting sized portions of various specialties such as Chicago 'Red Hots' and Nashville 'Hot Chicken' accompanied by cocktail pairings from Deep Eddy will be on the patio pouring beer a la carte!”  (Yes, that sentence gets grammatically weird.  I copied and pasted their text verbatim.)

Advance reservations could only be obtained by downloading and using a less-than-1-year old App called Reserve.  Kind of annoying, however it did come with the coupon code that got each person -$25 off their bill.  The only catch to the discount was that only one could be used per reservation/check, no matter how many people it was being split between, so if we each wanted to use our -$25 credits respectively, we’d have to have three separate reservations/checks.   We wanted to make sure we were seated together, so we went with a single reservation for three people, which would allow us only one -$25 discount.  This turned out to be mildly frustrating because when we arrived at the restaurant, we learned that rather than being a waited-table type thing (which, am I crazy, the description and price seem to imply?) it was actually a seat-yourself buffet-style dinner.  So we could have had three separate reservations/checks, sat anywhere we pleased (as we did), and used all the individual discounts.  Oh, well.

Another side note -- I point out that Reserve is less than one year old because it ended up posing some problems both while reserving and when it came time to settle the check(s)….everything from a typo in the actual event pricing resulting in a mass email being sent out with a correction, confusion about needing separate versus group reservations, inexplicable billing mistakes, and other various miscommunications.  The issues specific to our evening are now mostly repaired (almost a week later), but the amount of back and forth that had to be gone through to attain resolution was mildly excruciating.  I’d like to give them the benefit of the doubt, but errors and omissions were so rampant that we are honestly weary of using the App again, ever.  It remains to be seen if we will, as we do still have some -$25 credits to use towards future checks.  I will say this, for as much of a snafu the app caused (as Jessie described it: "new glitchy app software is glitchy"), and for all its faults, its customer service was great.  They tried really, really hard to solve all the problems, all while staying calm and pleasant when it would have been totally understandable if they hadn't or couldn't.  That could very well be its saving grace.

Anyways, despite the frustrations leading up to our arrival at The Sinclair and the surprises when we got there (another small one is outlined below), it turned out to be a very nice end to what had been a gloomy and rainy couple of days, because thanks to clearing skies and lovely heat lamps we were able to sit out on the patio in a quiet corner (BTW, some of the pictures in this post might be a little reddish because of those heat lamps).

Each guest was given as souvenirs a mason jar with the Deep Eddy logo printed on it, a pair of sunglasses, and some lemon-flavored lip gloss.

We were also each given 6 food tickets (for “paying” at the buffet) and 2 drink tickets.  Wait, what?....2 drink tickets, you say?  What happened to “drink pairings” and “Each Dish Includes a Cocktail Pairing!”?  Yeah, we wondered that, too.  It turns out that they decided to give each person 2 full-size drinks, rather than 6 smaller ones.  We bucked this system (there were three of us, after all) by each getting two different full-sized drinks, and shared them amongst the table.  Win.

Later in the meal, they started bringing around shot-glass sized samples of the drinks, but I honestly don’t remember seeing all the varieties come by.  In any case, we of course took samples and used them to top off our mason jars.  Lol.

Here are specifics on each of the cocktails (click on each picture for a larger view if you can't read the ingredients easily here): 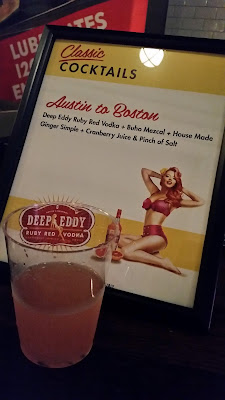 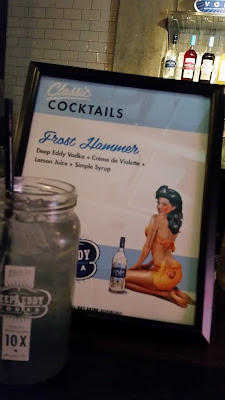 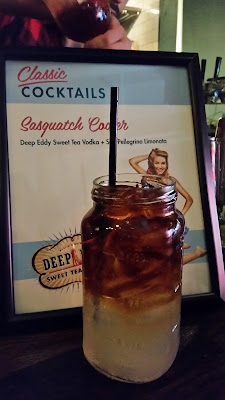 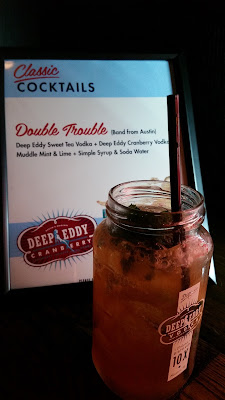 After sampling the beverages (all of which were very not bad), it was time to dive into the food.  We went in no particular order, some of us grabbing some things while others of us grabbed different things.  I will just show the yummies in the order I personally chose to eat them….

In the end, it was a slow-paced, relaxing evening full of good food, pleasant atmosphere, excellent people, and stimulating conversation.  We took our sweet time and had a sweet time.  Although, I will say that if we had paid the full $60 ticket price, I don't think any of us would have judged it (the food and beverages, I mean) as worth it.  The relaxation and company could have been accomplished anywhere, such as at J.P. Licks where we went afterwards.  ;)  And going by how many other people were present (i.e. not many), I don't think anyone else thought the price was right, either.

It was most assuredly a Foodventure!

Posted by The Robinator at 6:50 PM No comments: