"Would Ya Please Pass The Jelly?" 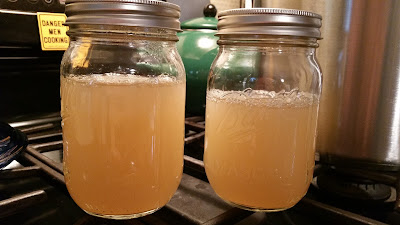 I had a very large bottle of wine, opened and with not much of it drank, left at my house by a friend after an event that Husband and I hosted.  I am not much of a wine person, especially white wine, so I had no idea what to do with it; and because it was Moscato, it would be too sweet for cooking with.  After lamenting in passing about this “dilemma” in the proximity of other friends (I do hate to waste things, even if I didn’t pay for them), it was suggested that I make jelly out of it.  I didn’t know one could make jelly out of wine, but what the hell, right?  To the Internets I went researching, and soon enough, I had a plan and a box of pectin.  This, was, let’s not forget, my first foray into any kind of canning other than pickles, and I would most certainly categorize it as an experiment.  I will tell this story mostly via pictures.  Here goes...

Thoughts, musings, and what mt brain absorbed:
In the end, I feel as though I learned a lot insofar as the basics of canning (general method / basic concepts / procedure / order of operations).  I feel much more confident and less intimidated about it all and look forward to giving it another try sometime soon.  I also plan to try jams, preserves, some no-pectin recipes, etc.


EDITED TO ADD:  After chatting with my boss about the bland-ish taste my jelly ended up with, she suggested (thinking in the realm of wine/food pairings) that next time I put some basil in the jelly.  Hmmm, very interesting.  Given how well hot peppers go in sweet jellies, I think this sounds like a good idea.  I am even considering melting this jelly down and re-canning it (because that’s a thing that can technically be done) into smaller jars, with the added basil.

Posted by The Robinator at 9:26 AM No comments: