We decided it would be wild boar tacos for dinner tonight.  Gluten-wise, since we have Mission corn tortillas in the freezer, we though there'd be no problem.  But a look at the ingredients goes against our current "is it the gluten or all the stuff that comes along with gluten" experiment:


Ground corn treated with lime, water, cellulose gum, propionic acid (to preserve freshness),
benzoic acid (to preserve freshness), phosphoric acid (preservative), guar gum, amylase.
Cellulose gum?  Propionic acid?  Benzoic acid?  Phosphoric acid?  Guar gum?  Amylase? -- Why do these things need to be in there....especially considering this is a product kept in the frozen foods section?  I don't want to eat them, and they interfere with the experiment.  So, no thanks.  Moving on.

I Googled for a corn tortilla recipe and found this one.  Seriously, could it be any easier?  Off I went to Market Basket and bought some masa harina.  I bought Maseca brand Instant Yellow Corn Masa Flour.

Now, which one of these do you want to eat?

They really were easy to make, even without a tortilla press.  Here's what I did (basically just following the recipe I found online)....

First, mix 1-3/4 cups of the masa harina with 1-1/8 cups of hot water (you might also want to add some salt if you aren't going to be putting salty foods into these tortillas, or if you are going to be cutting them and frying them up into chips).  I tried to mix the dough in my stand mixer, thinking I would knead it using the dough hook, but it's not quite that moist and didn't readily come together in the mixer.  So I just mixed it by hand in a bowl, like a meatloaf.  If the dough is too wet or too dry, make adjustments by adding more masa harina or water, a teeny bit at a time.

Knead the dough until it becomes pliable and smooth (this took just a minute or two).  Then, wrap it in plastic wrap and let it sit (on the counter, not refrigerated) for a half-hour.  I am not sure why the recipe called for letting it rest like this, or if it would be okay to skip this step, so I just did as instructed.

Take a little bit of the dough and form it into a ball. 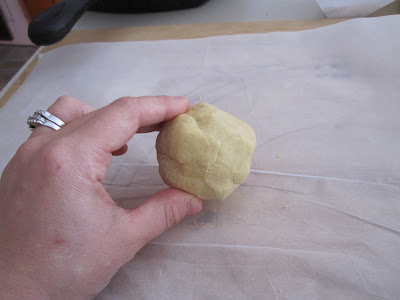 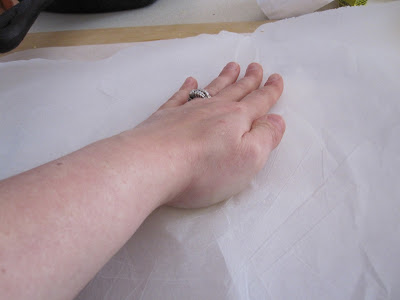 Now, roll it out with your pin, rotating the whole thing a quarter turn every few strokes.  Note: the thinner you make it, the better.  (I cooked 2 that were too thick before I figured out that thinner makes a much better final product.) 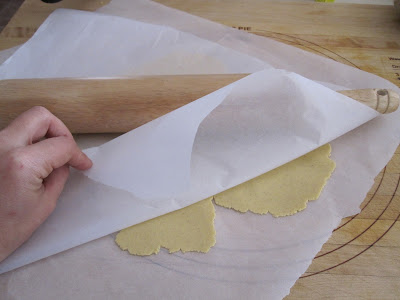 Using a bowl or any other circular object that is the size you want, cut out a circle.  I cooked one that had irregular edges before I decided to use a bowl to get a perfect circle, so counting the 2 thick ones from above, I had a total of 3 tortillas that weren't perfect in the entire batch (and this was only my first try making these -- like I said, super easy). 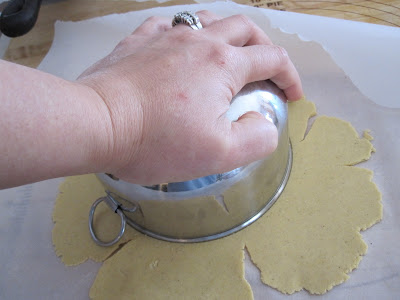 If the dough splits or holes appear while you are rolling it out, all you have to do is rip off a bit of dough from an edge, place it over the holes, and continue rolling out.

Gather up the edges of dough that didn't get cut into your circle, add some more from the main dough pile, form a new little ball and repeat the pressing/rolling out process until you have a bunch of raw tortillas. 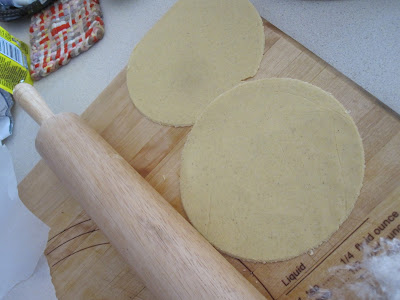 Cook each tortilla in the dry cast iron skillet (no oil or anything) for about 30 seconds per side.  When you flip it to the second side, it should puff up a little bit and look like this: 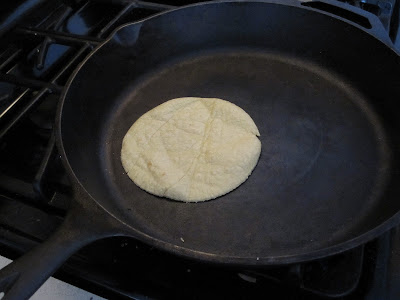 I ended up with 15 five-to-six inch tortillas (with just a tiny ball of dough lefover that wasn't enough to make one final tortilla).  I probably could have gotten 17 if the first two were rolled out thinner.  Anyways, each of the 15 has: 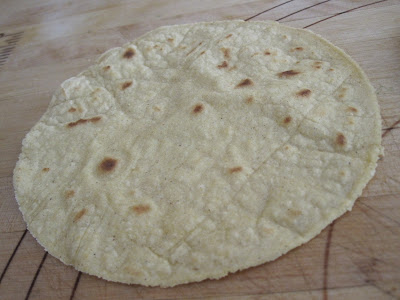